So here’s a little update on the mice I currently use at least every once in a while and my opinion on them after months of use.

My favourite mouse for now. The only think I dislike about it is the crappy scrollwheel, it feels cheap, it works OK but the amount of ‘clicks’ per revolution is too low.

My trusty old Deathadder doesn’t get much use these days. I think it’s too big to comfortably throw around, other than that it’s still great.

Too big, the left click seems to misfire every once in a while and the weird acceleration issues of the Philips twin-eye sensor have degraded this mouse to my backup mouse at work.

A great wireless mouse. Zero lag on the wireless, decent playtime on batteries and the ability to switch to wired mode very quickly. The glowing charging station and glowing scrollwheel are totally over the top, draws a lot of questions (“Didn’t it glow blue 5 minutes ago?”). The battery adds a bit of weight, but other than that it’s basically a Deathadder with a worse sensor. Again the Philips twin-eye sensor with it’s acceleration ruins it for me. Therefore it’s my default mouse at work.

Great mouse with only minor acceleration issues. Lovely scrollwheel. The crazy LCD on the bottom of the mouse allows me to set everything I want. A small issue is the ‘boot’  time of the mouse. Feels like it takes 10 seconds for the mouse to become usable after plugging it in.

Lovely shape, decent sensor. The scrollwheel totally ruins this mouse for me, it’s even worse than the Abyssus one. It’s loud, has a horrible feel to it and the ‘clicks’ per revolution is the lowest of them all. 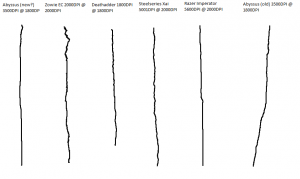 Here’s a little test comparing a bunch of different mice and sensors.

With all mice I tried to move straight down on a Razer Goliathus Speed cloth pad while drawing a line in MS Paint.

All mice had prediction aka drift control disabled so the lines aren’t artificially straightened by the mouse.

As you can see in the picture the mice varied quite a bit in their behaviour. Judging by the picture you might think that both the Abyssus and Imperator had excellent performances while the Zowie EC2 and Xai didn’t do so well.

But what the picture doesn’t show is the amount of negative acceleration experienced during this test. The Imperator slowed to a crawl, forcing me to move it quite a bit further to get the same line.  None of the other mice showed this behaviour and surely the “Dynamic DPI scaling” of the Imperator is the problem here.

What is clear from the picture is how horrible the Zowie EC2 is on a Goliathus Speed mousepad.

Taking all these things in account, here’s my final scoreboard: 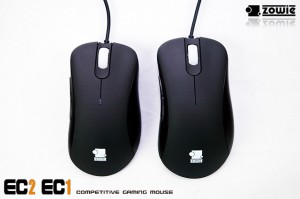