I’m currently helping a colleague to build a rather large community website using Ruby on Rails. As most Rails developers are well aware, Ruby isn’t exactly the quickest language you can use to build web applications. To get a rough idea of how much users our current code would handle, I decided to run some performance tests.

First, here’s a picture of the page that was used.

The page has a tagcloud, site statistics and a conditional menu in the upper right corner.

For the benchmark I’m using the following tools

ApacheBench 2.0.40. To fire off a large amount of requests into the webserver.

nginx 0.5.26. A lightweight HTTP server, which will act as a proxy/balancer in front of the Ruby application servers

For the benchmarks I settled on the following scenario’s.

Cluster of 4 Mongrel instances behind nginx

Cluster of 4 Thin instances behind nginx

In a real production environment, you’d never see the single Mongrel instance, and certainly not in development mode. The graph will show you why. 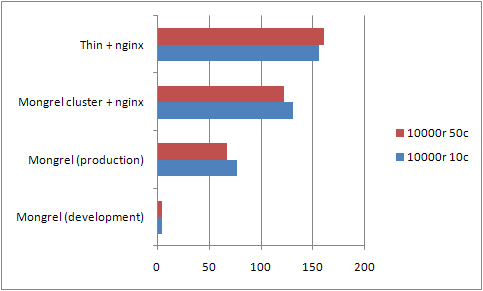 I’m pleased with the results, we still have a lot of stuff we could cache and database queries that could be optimized, so there’s room for improvement. The server that will eventually host the application runs an Apache proxy going to mongrel_cluster. I’m probably going to run some benchmarks later, to see how Apache proxy holds up against nginx.