I’ve been running my Areca RAID array for a few months now and I’m very pleased with it. The only thing that was bothering me was the lack of MRTG graphs for the attached disks.
The disk temperature is an important thing to monitor, because as Google pointed out, a high disk temperature has a significant effect on drive failure. 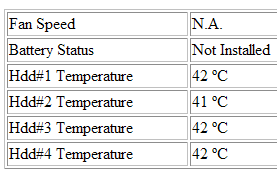 Areca has made some excellent tools available to monitor your array and attached disks. For example, Areca’s web interface can show you all the disk temperatures.

In Areca’s web interface you have total control over your RAID array. You can add/remove disks, create new arrays and do a check on existing arrays.

But it’s annoying to have to log in to this web interface just to check the temperatures of the disks. Also, it doesn’t come with nice graphs and history information. It just shows the current temperatures.

Areca has also made a CLI utility. Using this utility you can do the same things as in the web interface. I’ve used the CLI utility to generate the data needed by MRTG. MRTG can only handle 2 datasources in one graph. Having 5 disks total (1 bootdisk, 4 RAID member disks), I would need 3 graphs to monitor the disks. So I decided to create a little BASH script that would take the temperature of the bootdisk, and the average temperature of the 4 RAID disks and feed this to MRTG.

One thought on “Areca HDD temperature in MRTG”