Razer’s past 5 years have been quite succesful. Clearly becoming a leading gamer’s brand that pushes the envelope. The hugely succesful Diamondback, using a temporarily Razer-exclusive sensor, showed Razer was back in business after their crappy first optical mouse, the Viper.

Following the Diamondback was an OK laser mouse, the Copperhead, and the awesome Deathadder, Razer’s first right-handed mouse. It was a great upgrade for gamers looking for the next best thing. The very good Avago 3688 sensor, with 1800DPI and very high maximum speed, guaranteed excellent tracking and is still one of the best sensors available. The familiar ergonomic shape pleased many coming from Logitech’s aging MX5xx line and Microsoft Intellimouse series.

The Deathadder was released over 2 years ago and is still very popular. Recently a newer 3500DPI version was released, which I’ll be reviewing soon as well. (Early verdict: Not as good as the old one.)

This review, however, is about the Razer Imperator.

First off the specifications, I’ll save you the Razer marketing speak and stick to the relevant parts, which I’ll discuss in order:

Starting with the Copperhead, Razer equipped most mice with onboard memory. Using this memory you can store specific key bindings and DPI settings directly on the mouse, which allows you plug it in a different computer, without drivers for the mouse, and still enjoy most of the special button binds.

A very important feature for LAN gamers who play tournaments.

Razer really gets this part about gaming mice, and the Imperator does it just as well as the other memory-equipped Razer mice.

The Imperator is Razer’s 4th mouse to use a Philips TwinEye laser sensor. The first mouse to use the TwinEye was a disaster (my Razer Lachesis review). The Razer Orichi bluetooth mouse uses the same sensor, but it has newer firmware and is supposedly better. The Razer Mamba has a newer 5600DPI sensor, which is identical to the one used in the Razer Imperator.

The sensor is much better than the one used in the Lachesis, but still suffers from some of the same bugs that plagued the old one (and the Mamba):

The mouse will move diagonally when you pick it up and put it back down again. Like in a game, you’re chasing a target, reposition the mouse, but after putting the mouse down the crosshair is not where you’d expect it to be. It’s just a little bit off.

In the case of the Lachesis, it also meant that clicking the mouse on a soft mousepad would make the cursor move, even though you didn’t move the mouse. The light tilt caused by the press of a button made the cursor move by a few pixels. This problem is still present in the Imperator, but it’s greatly reduced., only when you press the mouse buttons really hard.

Sometimes after repositioning the mouse one of the mouse directions (up-down, left-right) will not work for a split second. Think rocket jumping in Quake or TF2: a quick flick of the wrist, you fire a rocket, and you end up facing some weird way, messing up your jump.

Laser sensors still have some annoying issues tracking on certain surfaces, especially cloth. This can turn a smooth diagonal movement into a staircase-like line. I’ve encountered no tracking errors on the Razer Exactmat (white) and Razer Destructor (black), but had a few on the Razer Goliathus.  Kinda annoying on the desktop when trying to click a small button.

Shape-wise it’s obviously inspired (to put it mildly) by the Logitech MX5** series.

thumb up, thumb down, left, middle, right, middle up, middle down. 7 well placed buttons. I use 5 of them, because I can’t be bothered to set up the middle up/middle down buttons to do something different than change DPI.

The left and right mouse buttons are slightly harder to press compared to the Diamondback and Deathadder, but not as hard to press as the MX518. The scrollwheel has a nice click when you roll it and is easy to press down.

I considered this to be a stupid gimmick, much like the weights present on mice a few years back, but I actually quite like the adjustable thumb buttons. They allow you to perfectly place the thumb buttons for your hand. So if you use a palm grip, you place them further away from your wrist, and with a finger tip grip you’ll probably move them a bit closer. 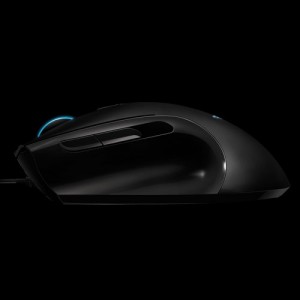 Changing the position of the buttons is quick and easy and after moving them the buttons feel just as the normal non-movable buttons.

Playing for a while with the Imperator I’ve come to the conclusion that technically it’s no match for the Deathadder. The Deathadder’s sensor is simply better suited for every surface I’ve tried.
Shape-wise however the Imperator is better for me.

This causes a dilemma, better sensor vs better shape. For now the Imperator’s better shape outweighs the better sensor of the Deathadder, during the coming weeks I’ll try to make a definite decision about which mouse I’ll keep using.

So the ultimate verdict: Would I recommend it?
In its current form, no. Just like the original Deathadder, there are too many issues with tracking.

I hope that, like the Deathadder, future firmware upgrades will fix the issues with the sensor so I can really enjoy this mouse.

Out of my regular group of gaming friends, 8 out of 10 use a Razer mouse. 6 of those are Deathadders, all bought after trying mine on LANs. I wouldn’t recommend them upgrading to the Imperator just yet.
Update:

After some usage, some additional comments:

This is a recurring problem and I still haven’t figured out if it’s caused by the way I move the mouse or just a periodic problem. It happens about 3 times per hour during a gaming session. Longest lockup was about half a second, enough to get me killed 😛

Haven’t seen this happen during my gaming sessions, but sometimes after leaving the mouse alone for a while, the lights are off, scrollwheel doesn’t glow and the cursor won’t move. Buttons still work and a few seconds after clicking, the mouse will come back to life. Weird.