Intro
A long, long time ago, May 2006 to be exact, I entered a contest “guess the new Razer product” on Razerzone.com. Thanks to my cunning hacker skillzzz (open ‘images’ dir on www.razerzone.com) I quickly found out the new product would be a soundcard going by the name ‘Barracuda’.

It turned out the Barracuda IAS consisted of two parts. A soundcard (AC1) and a headset (HP1). But you’re free to use them seperately. 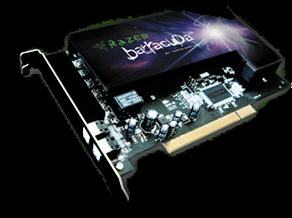 I was one of the lucky 10 winners of that contest and received a mail claiming I would own the gaming world with the new headset and soundcard in July.
The months went by and pretty much nothing happened.

I read about delays for both the headset and soundcard and decided to wait till both products had a release date.

Finally in November the HP1 and AC1 were becoming available in the stores so I sent a mail to RazerGuy, the Razer CEO, asking him who stole my prize.

A few days later I received the headset and soundcard. I don’t know any other IT company where you can just mail the CEO to get things done 🙂

Full size pictures are available from my Gallery

The AC1 doesn’t look like a soundcard. This is caused mainly because of the strange audio connector. Razer calls it a HD-DAI connector, it’s actually a DVI connector rewired for audio. This might be kind of confusing and it’s a pretty bad idea to plugin your TFT-monitor to the HD-DAI port or to plug your headset in a DVI connector of your graphics card.

Besides the HD-DAI connector there are also two SPDIF connectors. One SPDIF-IN and one SPDIF out. On the rear of the card there are a few other connectors.
Spefically, CD-IN, AUX-IN and front-panel connectors.

Luckily these are all standard connectors, as opposed to e.g. a Audigy 2ZS that requires an expensive front panel connector in order to connect it to the mic and headphone connectors on the front of your computer case.

To connect the AC1 with your existing soundcard, Razer included a HD-DAI to standard mini-jack connectors. Using this ‘convertor’ I connected the soundcard to my Logitech Z-5500 speakerset.

Installing the soundcard was a breeze. The manual suggests you need to take out your previous soundcard first, but I didn’t. Even so, the soundcard drivers were installed without a hitch using the installer on the driver CD.

After a reboot I was ready to go.

I had to make a quick stop in the Windows sound control panel to set the default sound playback/recording device to the Barracuda instead of my trusty old Audigy 2ZS. After this I was ready to go.

This is the view I got when I opened the soundcard control panel to setup my preciousssssss. 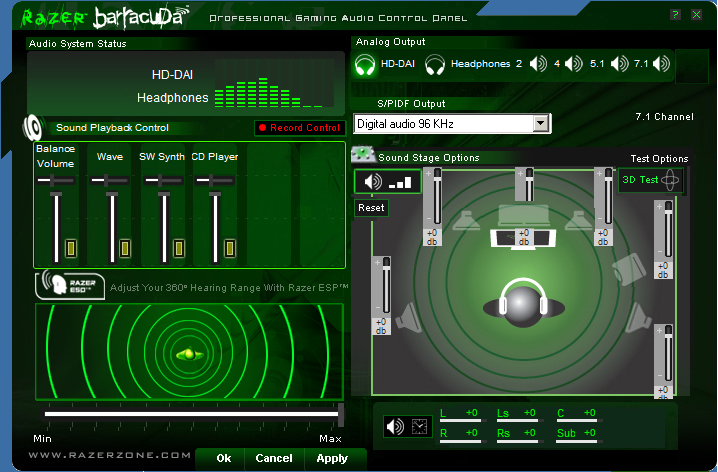 The Barracuda control panel has a 3D test to impress you with the 3D sound qualities of the card. The output on my Logitech Z-5500 system was pretty convincing. But so was my Audigy 2ZS.

I took the AC1 one for a test drive in the following games:

Sound plays an important role in Battlefield 2. When you’re being shot at it’s vital to know where the enemy is as quickly as possible. My Audigy 2ZS supports EAX 1.0-4.0 and Battlefield2 has EAX support.

The AC1 only supports EAX 1.0-2.0 because of the proprietary format of higher EAX versions. Using the AC1 with EAX support enabled in Battlefield immediately brought up some problems. The ingame sounds were OK, but the speech was jerky.

All was OK after disabling EAX and just using “High quality” sound without EAX.

CounterStrike is still one of the most popular online shoot’em ups. The low hardware requirements allow the game to be played very well on any system available today. CS 1.6 supports EAX and A3D, but for our test I’ll be only using EAX.

I immediately noticed the increased range of hearing with the AC1 compared to the Audigy 2ZS. This is a great advantage because it’s easier to hear an enemy coming. It sounds like the more distant sounds get a little volume boost and you appear to pick up footsteps a bit further than usual.
One thing that bothered me was sound distortion in close-range firefights. Maybe the card is boosting the volume on these loud sounds as wel.

Surround sound was good, it was very easy to pinpoint where enemy fire and footsteps were coming from.

The Barracuda control panel has the option to enable the Razer ESP ™. This is what it does according to the manual:

The human brain has difficulty pinpointing which direction a sound is coming from if it falls below a certain threshold.

Razer ESP(tm) allows you to control your hearing range in DirectSound3D games by altering the volume drop-off behavior of distant sounds. Sounds that may have been previously inaudible will now become much clearer.

Razer ESP(tm) technology also gives you an advantage by boosting critical sounds, such as an enemy’s footsteps, to a more audible level. This effectively allows you to pinpoint the exact location of your enemy more accurately than ever before. The actions of your opponents will be magnified by a larger degree and so will your frag rate.

After plugging in the HP1 using the special HD-DAI connector I immediately opened Winamp to start some sound tests. I was very disappointed with the sound the headset produced. It completely lacked bass, had a silly amount of high/mid tones and listening music was very tiring to the ears.

I messed around with the volume controls on the headset and the best sound was produced when I disabled all drivers except the front ones.

Even then, the bass was kinda lacking in power compared to my previous headset, the Sennheiser PC150.
However, 3D sound still wasn’t very good. There wasn’t coming any bass from the rear drivers in the headset.

After emailing Razer it turned out my HP1 unit was defective. I’ll have to wait for a new HP1 to continue testing the headset.

After no new from Razer I started mailing them again. Turns out I need to send in my current headphone for an RMA. This RMA package would have to be sent to Germany, making it an international package.

The AC-1 adds nothing new. It doesn’t have the mainstream support as Creative’s EAX/XiFi has, doesn’t add any new substantial features.

The HP1 is a comfy headphone, too bad it has no bass at all on the rear channels, making it a worthless headset for anyone who depends on surround sound. My trusty Logitech Z5500 is way better at telling me where an enemy tank is coming from. The HP1’s microphone is noisy and sounds hollow compared to the microphone on the Sennheiser PC150.

The Barracuda IAS is a very expensive kit that just isn’t worth it. For the same money you can get a XiFi, a decent headset and a stripper. That’s no choice at all.